[questions to Dr Rosensweet from the. NAAEM Committee:]

[Dr R responds:] “I’d like to combine your excellent questions re Formulations (of estrogens) and Bio-availability testing and begin with important background information: 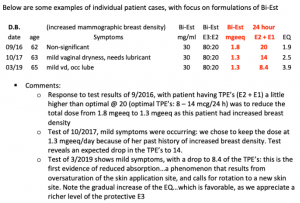 Thus, calculation of mgeeq and even ratio changes is very easy for the trained medical professional.

Fulfilling the wide variety of mg/ml and ratios is very routine for compounding pharmacies, with their technical equipment of analytic scales and computers for calculations.

Low dosage had led to low TPE’s. She too was nulliparous with a history of increased breast density, so year upon year we were cautious. Because TPE’s of 5.7 are below threshold for risk for osteoporosis and vaginal atrophy, she titrated up her dose.

If all of this seems a bit complex: